END_OF_DOCUMENT_TOKEN_TO_BE_REPLACED

There are now less than nine months left till the first American presidential primaries. The primary debates, as well as the debates between the Republican and the Democrat candidate, will as usual be fact-checked by various websites such as FactCheck.org and PolitiFact.com. It is hoped that the threat of being thus fact-checked makes politicians less likely to lie (there is some evidence confirming this hypothesis, though more research is needed).

As I have previously argued, there are, however, many other ways to deceive the audience besides making false or misleading claims. For instance, politicians often make logical fallacies, fail to provide argument or evidence for their claims, fail to address the question, and so on. Such errors should also be pointed out. In short, we need not argument-checking in addition to fact-checking.

Another problem with today’s fact-checks is that they’re usually published on fact-checking sites or news media which aren’t read by the majority of those who view the debates. It’s true that fact-checking is on the rise, but still it seems it could get a much wider audience, and have a much larger impact, if it was published in a more appealing format.

Specifically, the debates should be given subtitles where all fallacies, all factual errors, all failures to address the issue, and so on, are pointed out. In the short sample video below, I give an example of what it may look like. In the clip, taken from a Republican primary debate in November 2011, Ron Paul and Newt Gingrich are debating whether the Patriot Act and other legal tools intended to combat terrorism should be discontinued because they constitute an infringement on civil liberties.

Ideally, all debates leading up to the election next year should be subtitled in this way. If such subtitled videos were made available for free – e.g. on YouTube – they could become very popular, something which in turn could influence both politician and voter behavior. (See here for a general discussion on the potential significance of this kind of criticial analyses.)

Fact-checking sites are already putting a lot of work into reviewing political debates, so I don’t think the extra amount of work this would require is that much of an obstacle. Instead the real problems concern copyright. Would the networks broadcasting these debates let outside parties annotate their debates and upload them on YouTube? It seems improbable that they voluntarily would let them do this for free.

There are several possible solutions to this problem. The first is that the networks themselves argument-check them. A second possibility is that a fact-checking website, or another media outlet wanting to argument-check the debates, buy these rights from the network. A third solution is to develop a video annotation program similar to Genius.com, which allows you to annotate text on any website without infringing copyright. A fouth one is to instead argument-check the transcripts of the debates (though that would be less striking, and presumably would get fewer readers).

Let us turn to the sample video. This four minute clip was uploaded on YouTube by Paul’s supporters, who clearly think he won the exchange of arguments. When we pay more attention to what is actually being said by Paul and Gingrich, it becomes clear, however, that Paul’s arguments are noticably weak. Gingrich explicitly says that he does not find surveillance intended to prevent ordinary crimes justified, something Paul blatantly ignores when he implies that Gingrich wants a policeman in every house to prevent wife-beating. Also, he gives no argument whatsoever for the crucial claim that you need not trade off liberty against security.

Gingrich fares better, but one problem is that he never explains his distinction between ordinary crimes and issues of  national security. It is clear that wife-beating belongs to the former category, whereas nuclear attacks, which Gingrich mention, belong to the latter, but where is the borderline between these two categories? Gingrich sweeps this hard question under the carpet.

It could be argued that I’m too tough on Gingrich and Paul: that it cannot be expected that they go into these details given the format and the short amount of time they have at their disposal. While there is something to that, my criticism is not only directed at Gingrich and Paul, but also at the debating format which allows, or even demands, the participants to leave big holes in their arguments, mainly because of time constraints. Thus I point out all argumentation errors, regardless of whether it would be hard to avoid them given the time constraints.

There are four footnotes in the video, the footnote texts of which can be found below. 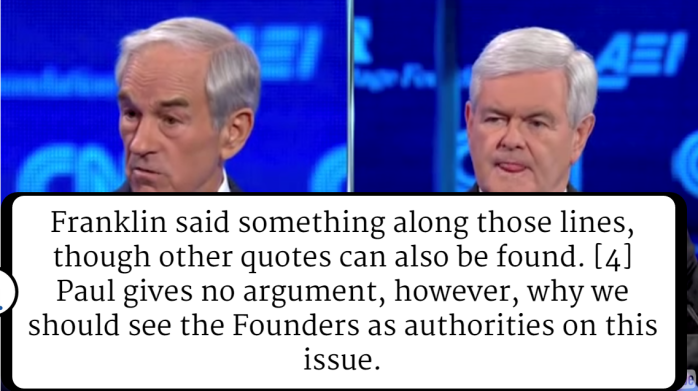 1) The claim that there has been at least 42 thwarted terrorist attacks since 9/11 is probably true.

2) It’s not easy to get independent information on the role of the Patriot Act in thwarting these terrorist attacks. This Pro Publica article from 2013 (i.e. from two years after the debate was held) claims we have little evidence on the issue.

3) McWeigh was an extreme right-wing terrorist who killed 68 people in an attack in Oklahoma City 1995.

4) The Franklin quote is:

They that can give up essential liberty to obtain a little temporary safety deserve neither liberty nor safety.

On the other hand, John Jay wrote in the famous Federalist papers:

Among the many objects to which a wise and free people find it necessary to direct their attention, that of providing for their safety seems to be first.

One reason not to see the Founders as authorities on this issue  is that there were no nuclear weapons, or other weapons of mass destruction, in the 18th century. It could be argued that such weapons make new trade-offs between liberty and security necessary. This objection should have been discussed.